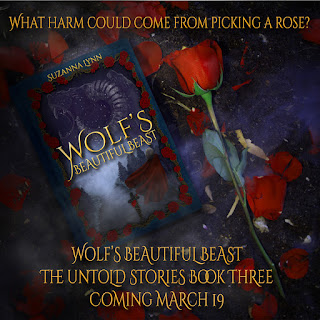 Wolf's Beautiful Beast has been a rose thorn in my side for four years. Don't get me wrong, I adore the story. It's just, Beauty and the Beast is my all time favorite fairy tale... like ever. That being said, I felt a lot of pressure to deliver an amazing twist to the classic tale and every time I put pen to paper, my brain would lock up.

I'd get a few sentences or even scenes once and a while, but what had come so easy before stopped as though it has hit a castle wall. However, the story was still alive in the back of my mind, I just needed to release it brick by brick.

After four years, countless tears, and many rewrites, I can happily announce that Wolf's Beautiful Beast is coming March 19th!

So without further ado, let me present the cover and official synopsis!

What harm could come from picking a rose?

Under the silver glow of the moon, Lycus was cursed to run through Blakx forest in wolf form. All that changed when Rapunzel set him free. Now, after learning she and Red plan to journey to the Land of Oz, he joins their adventure... oblivious to the darkness they will soon face.

Stranded in the land of Bruen, the trio hears whispers of a lost princess and a horrible beast. After sticking his nose where the king felt it didn’t belong, Lycus is forced to join the hunting party to kill the beast and rescue the princess.

Proving no good deed goes unpunished, Lycus is captured by the same beast he was ordered to slay. It doesn’t take long for him to realize all is not as it seems in the abandoned castle and there is far to this story than meets the eye.

Racing against the clock, can Lycus save the princess before his friends are imprisoned for his mistake? Or will he be forced to choose between his beauty and the beast within?

Want more? Join us on Facebook for the release party event that will take place March 19. We are already doing giveaways and contests, and new book teasers will be revealed between now and release day; so don't miss out!