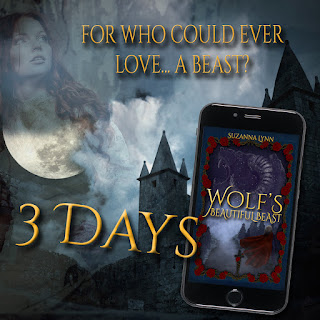 I can't believe it is only three more days until the release of "Wolf's Beautiful Beast!" Here is today's sneak peek!

I first pushed against the door, but it was not going to give easily. I tried kicking it, but it barely budged. Running as fast as I could, I slammed my shoulder into the wood. I bounced off, falling to the floor in a heap. I was almost certain the crack I heard was not the wood, but my bones.

“Gods help me,” I cried out, grabbing my injured shoulder. “What is it made of? Stone?”

The door clicked and slowly opened. “Actually, I believe white oak,” said Arabella, carrying a silver pitcher, along with a towel. “I thought you might want to clean up.” She stepped past me as though nothing about the situation was out of the ordinary.

I winced as I stood. “Where were you all night?”

“Doing the beast’s bidding.” She groaned, setting the pitcher and towel on the small table by the window. “As I’ve done every night for the past… how long has it been?”

“My understanding is you’ve been missing for five years,” I explained, stepping closer.

She turned on her heel, eyes wide as she searched my face. “Has it really been only five years?” She stood silently for several moments, staring through me.

“I… uh… believe so,” I slowly approached her. “That’s just what I was told by the king and queen.”

Her eyes shot to mine. “My parents? They sent you, didn’t they?” She turned back to the table, pouring the water in a basin. “Well, I’m sorry to say their efforts will be fruitless.”

“But it doesn’t have to be.” Reaching out, I touched her shoulder. She jerked away, knocking over the basin. Water pooled at her feet as she backed against the wall, staring me down.

“I’m sorry,” I said, putting my hands up in surrender. “I never meant to scare you.”

She took deep, slow breaths as her gaze fell between the door and me.

“I am not the princess anymore,” she growled, yanking the towel from the table and bending to dry up the mess.