An excerpt from "Hook's Little Mermaid"... read by me!

Let's be honest for a moment. There are very few people that hoped the teacher would call on them to read out loud during class. It was terrifying!  I would count ahead chapters and scan them to make sure there weren't any words I would stumble on if I were called on.

However, I did not check ahead on this reading. I actually decided to do it on a whim!  So please forgive the few hiccups I have during it.

I do hope you enjoy this sneak peak of "Hook's Little Mermaid;" due out in April!

Posted by Suzanna Lynn at 10:39 AM No comments:

Though the virtual dust is still settling from the construction of my new site, I'm excited to be taking on this next step in marketing my books.

My website will not only be a central hub for all things Suzanna Lynn, it will allow you access to exclusive content like pre-orders, news and events and links to all my books on all platforms.

With officially moving my books out of Kindle Select so they can be present on all platforms including Barnes & Noble, iTunes, Kobo and more, the website will be a great way to grab each new book as they are released!

Posted by Suzanna Lynn at 10:31 AM No comments: 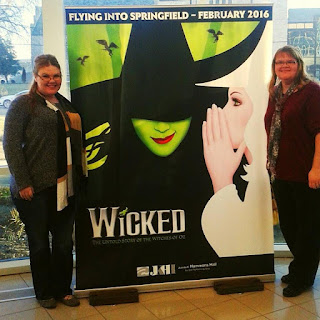 Yesterday, I got the chance to fulfill a 'bucket list' dream!

Ever since I read "Wicked" by Gregory McGuire, I was hooked. It became a goal to me to see the musical someday, somehow. However, being a mother of three has it's limits and one of those is green and has dead presidents on it.  There simply wasn't enough money to travel to Broadway, and when the musical began touring, it didn't come close enough to work.

My sister and I splurged for the good seats (after all, it's still loads cheaper than traveling to New York right?) the day they went on sale, and we picked the second day of the tour (so the actor's were still fresh).

When I walked in I practically screamed upon looking at the set. The clockwork dragon, the map of Oz... it was amazing!

I was on the edge of my seat the entire show and I had to keep myself from giving each number a standing ovation!  Upon finishing the "Defying Gravity" number, I will admit, I screamed!  It was so awe-inspiring. 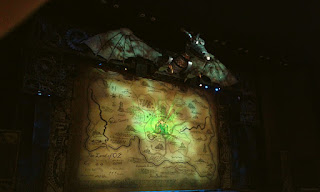 I was pleased to find that the ending of the play was rather different than that of the book (who wants to leave the play having fell in love with the main lead to have her die even though you know it's supposed to happen?).

All in all, I left feeling exhilarated and fulfilled.  Of course, I have spent the entirety of my day singing "Popular" and "Defying Gravity;" but that's normal, right?
Posted by Suzanna Lynn at 3:01 PM No comments: