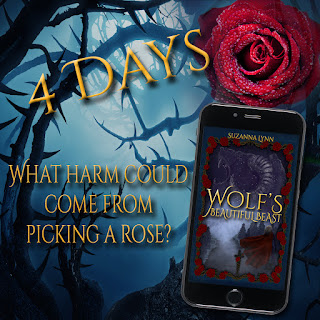 Only four more days until the release of "Wolf's Beautiful Beast!" Here is today's sneak peek!

A low rumble emanated from the beast as it turned and moved to all fours. It lowered its head, horns aligning to charge. The beast’s ember red eyes bored into me, the rumble turning into a full-fledged roar. It kicked off the ground, snow and mud flying in its wake.

I growled, willing my body to act when everything in me said flee. I leaped into the air, intent on meeting the beast head on. However, as our paths came to a head, the creature burst into the air, spreading its wings to clear me with ease.

The sound of metal clanged as it landed. I spun, recalculating my attack. It had landed on General Drax. The beast loomed over him, saliva falling in his face from its snarling teeth. I growled, snagging its attention away from the general for a split second. It was enough. Drax grabbed his dagger and pierced the leg of the creature.

Roaring, the beast retreated several paces, allowing Drax to scramble to his feet. He grabbed a long limb from the fire, throwing it at the feet of the creature. Its eyes shown orange in the burning light.

The beast stretched its golden wings, fanning the flames. Hot embers flew toward the general and his men, causing them to turn and shield their faces.

The creature looked at me one last time, releasing a small groan. Then, like a great eagle, it lifted into the air and into the cover of darkness.

For several moments, everyone stood still as the grave. Tension rose as we waited for another attack. I listened and scanned the area for an ambush. When I felt it was safe, I transitioned back into the man, grabbing a nearby cloak to wrap around me.

General Drax scowled at me as he wiped mud and drool from his face.

Clenching my teeth, I grabbed my bag and headed into the darkness to dress. “Still under the impression that the beast doesn’t exist?”