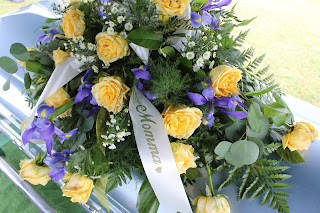 It has been a very long month. Stubborn until the end, mom held on longer than anyone thought possible.

My sister and I worked tirelessly to make all the funeral arrangements. We even decided we would hold the funeral ourselves, instead of getting a pastor that didn't know her to hold it.

The day was supposed to be covered in thunderstorms, but God gave us a miracle and the clouds parted for our little graveside service.

The next blessing came in the form of guests. Mom was extremely shy, so making friends in her older years was very difficult. However, friends from her childhood and early married years showed up to pay their respects. It truly blessed me to see so many people having to stand because there weren't enough chairs.

The big event of the day was when I was chosen to give mom's eulogy. I have done plenty of public speaking, but never a eulogy. After a lot of thought, I decided that it needed to be funny. I was always able to make mom laugh, and felt this final act was necessary to give me closure as well as reflect a celebration of her life.

Here is what I had to say:

Family and friends, thank you for coming. It would have warmed mom’s heart to know each of you were here to celebrate the woman she was.
When I decided I wanted to give a speech at her funeral, I did a little research. As an author, there is always a degree of pressure when it comes to writing – but when writing a eulogy, there are certain rules one must stick to.


Rule number one - keep in broad. Too many personal experiences will weigh down your speech.
Two - keep it brief. Studies show, people stop listening after three minutes.
Three - keep it classy. Make it a dignified reflection of the person.

And four – keep it together. Composure and poise is key to your speech.


These are great things to keep in mind when writing a good eulogy. That being said, I will not be keeping to any of these rules today. While this may be a shock to some, it would be no surprise to mom. It took great pleasure in making her laugh, even in some of the more serious situations life threw at us.
So, as a tribute, I am going to tell you what I wanted to write in the obituary – but April had the sense to sensor me.
………………………………………


Mom passed away peacefully in her sleep at Magnolia Square Nursing Home on July 24, 2019. It is believed she lost patience with the nurses and deciding to push the ‘Call Jesus’ button instead.
She left behind a treasure trove of items to my sister and I, and we have absolutely no clue what to do with them. So, if you're looking for an extremely large bookcase that leans, a dusty, chipped, ceramic teapot collection, a slightly used microwave, or even a 1999 Buick with only 189,000 miles and a trunk full of 763 screwdrivers; let us know.


No, this is not an ad for a pawn shop, but a story of a great woman, mother, and grandmother.
Mom was an avid artist, especially when it came to painting and working with ceramics. She could put brush to canvas and create beautiful paintings that seemed effortless. In fact, she had a case full of every color oil paint you could ever want. However, they had to be thrown out due to an artistic family of mice who decided to take up residency in the art case, and snack on the paints. They did leave behind an array of Prismacolor droppings that would likely be considered award-winning art on the modern-day market.


In addition to art, she loved making crafts. Hobby Lobby was probably her favorite store. However, after discovering her hidden closets of craft supplies, we quickly concluded that crafting and purchasing craft supplies were – in fact – two different hobbies of hers. Sadly, these hobbies have been inherited by both April and I; as we too, have hidden craft supply closets.
Mom loved scary movies, especially the B-rated ones like The Blog, Jaws, and Attack of the Killer Tomatoes. She was frequently found watching them while holding a blanket near her face (should the need arise to hide her eyes). She also found this a useful punishment for her children, whom she would force to watch said movies should we need a little discipline. To this day, April cannot look at a tomato without laughing, while I still have an unhealthy obsessed with Great White Sharks.


Once I became a teenager and the “Jaws” marathons stopped working as punishment, mom was at a loss as to what to do with me. I remember her saying “I hope you have a child just like you someday!” Obviously, this was not meant to be a compliment. Sadly, mom had not considered that when I had that child, I would still be living with her! Jokes on you mom. However, she retaliated by moving in with me and my family last summer for several months. Well played, mom; well played.
Though all three of us have led busy lives, Mom, April, and I, tried to get together when we could. Case in point, when April and I took her out for sushi one Mother’s Day. While apprehensive, she tried it and actually started to enjoy it. She even tried some of the more exotic ones that included eel! However, we didn’t realize just how adventurous she was until she yelped and said “Wow, that one was a bit spicy.” My sister and I looked around confused, as we never ordered anything spicy. Suddenly, I yelled out, “Where’s the wasabi?” Mom had mistaken the large glob of wasabi as an avocado roll. She took it like a champ though, only drinking a few swallows of water before moving on.


Once she moved to Springfield, she spent a large part of her time volunteering at local charities like Crosslines, Boys and Girls Town, and Convoy of Hope. It meant a lot to her to be able to help those in need. Even after she became unable to volunteer due to her health, she supported various charities with small financial donations through the mail. This became apparent by the stacks of “fan mail” she received from those charities. If she’d had a penny for every “complimentary” return address label she received from St. Jude, she would have retired a rich woman.
If what I’ve said has shown you anything, it is that mom had a wonderful sense of humor. She loved to laugh, and thanks to the antics of her children and grandchildren, she had the opportunity to laugh a lot. This is something we have all thankfully inherited from her.


So, in closing I will leave with the words mom said to me often when I spoke to her about my pain and problems. “This too shall pass. It may pass like a kidney stone, but it will pass.”
Posted by Suzanna Lynn at 7:30 PM No comments: