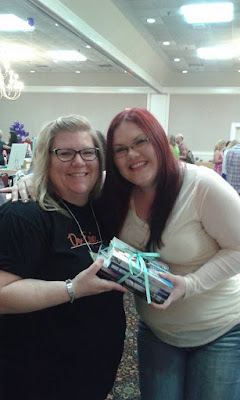 While at #utopYA2015, I held a five book giveaway for one lucky Utopian! Numerous of excited attendees entered to win this amazing book prize pack.

The drawing was held from Thursday morning to Friday evening.  Janet, our beloved UtopYA head, did the honors of drawing the winner from the vase full of names.

I have officially returned from UtopYA feeling recharged and excited to run back into the writing cave!

However, my journey to UtopYA didn't start merely a week ago as I set off to Nashville, it started back in early 2014 when I published my very first book The Bed Wife.

After some urging from my wonderful editor and good friend, I decided to make the trip to UtopYA 2014 last June.

However, those plans came to a screeching halt when my father-in-law became suddenly ill.  Within a week (the very weekend of UtopYA) the man I had known as a father was taken from this world.

﻿
In the months that followed, I spent my time consoling my three sweet children.

Additionally, we moved my mother-in-law and her two very large dogs into our house that was already full to bursting.

Additionally, my stress levels continued to incline when a dog got under our house and completely destroyed our ac/heating duct work, my eldest daughter broke her collarbone, my youngest daughter ended up sick nearly ever other week after entering Kindergarten (I swear, little kids never wash their hands enough), and to top off my sucky 2014, my husband had a car accident that totaled our car and I ended up having to have my gallbladder out. This was all in just a matter of six months time.

﻿﻿To say I was uninspired to write was the understatement of the year.

Over Christmas, my dear friend Nancy came to stay with me for a few weeks. She sat with me night after night, bouncing ideas and brainstorming about my books.  On New Year's Eve, while we waited for the ball to drop, Nancy (who had been to UtopYA2014) insisted that I go in 2015 and represent myself as an author.

I found myself inspired by my friend's love and devotion.  I pushed myself back into my writing cave and finished my second book, The Heir.

June 1st came and I was all set and ready to go. I had my table spot, I had my ticket, I had my hotel reservations, I had my hubby's vacation time put in and I even had a babysitter willing to spend a whole week with my crazy 'summer vacation loving' kiddos.

On Monday, June 15, the day before my husband and I planned to load up the mini van and head to Nashville, another set of road blocks showed themselves.

As I packed my bags for the trip, I heard an earthshattering sound that sounded as though a jet was crashing into my house.  What it was, though, was my mother-in-law's foot slipping off the break and hitting the gas as she pulled into my driveway.  She plowed through our two car garage door and through the garage that was set up with tables full of items that we planned to have for a garage sale the following month.  Hundred's of dollars worth of damage in the blink of an eye, and less than 24 hours before my trip.﻿﻿
However, I was determined to not let the negativity control my life anymore.

I ran to my mother-in-law, made sure she was okay, then got her into the house.  My son came to me and said "momma, today is a bad day huh?"  I smiled at him and said, "You know what honey, momma had been in the garage two minutes ago.  Momma's not hurt, grandma's not hurt, only the garage is hurt. Today is a very good day."

I continued on packing my bags and preparing for the trip while my husband and brother-in-law made temporary repairs to my very damaged garage door.

Late that night, I tucked my little one's in bed and finished up some last minute things before leaving for our trip the following morning.

It was almost midnight when I decided to get online to check my credit card statement, making sure my payment had gone through, clearing the card for the trip.  To my surprise, I found that there was a big notice on the page when I signed in "The card has been restricted. Please contact customer support immediately."

"Oh great, now what?" I asked myself.

So I called the credit card company and they referred me to the fraud department.

"Hello, I just wanted to verify some charges with you," said the representative. "Could you please confirm that you used your credit card to purchase $147 worth of products from Billy Bob's Cattle Feed Store?"

"Oh, okay.  Well could you confirm that you tried to purchase $687 at Aunt Nelly's Horse Tack online?"

So, summing it up, my credit had been very stolen and, apparently, by farmers!  There were numerous charges on the account that had, thankfully, all been denied because they were suspicious.  However, the problem was, I was planning on using this card to fund my trip because I do not like using debit (for this exact reason) and carrying hundreds of dollars in cash is just not something you do for a trip.

The credit card company stated that they would expedite a temporary card to the hotel in order for me to use but it may not arrive until Thursday.

After hanging up with the credit card company I let the stress and sorrow take me.  Tears began rolling out of my eye faster than I could wipe them away.  My husband came to my side and held me while I sobbed things like "What's the point of going? No one will want my book anyway?" and "Maybe I'm not supposed to go on this trip."

However, after many "Honey, your books are great" and "You are going on this trip" from my hubby, he tucked me into bed, wiped away more of my tears and I fell asleep.

The next morning I woke with a little more clarity. "I am not going to let this stop me. I am going to Utopya!"

I called the hotel group coordinator who was beyond sweet and understanding.  She assured me all would be okay as long as the card arrived by checkout date.

So we packed up the minivan, kissed the kids goodbye and drove to Nashville.

Once we arrived I quickly saw what all those 'bad forces' were trying to keep me from - love, friendship, inspiration and joy.
﻿
I sat up my table and sold over half the books I had brought with me (I was thinking I would be lucky to sell one since I was such a newbie). But that wasn't even remotely the best part.  I learned so much from the other authors while I attended the informative panels.  Suddenly, I went from terrified to ask questions, to feeling like I was talking with old friends!

By the last night, I sat at a table before the awards joking and laughing with everyone around.  "These are my people" I told myself, "They really care about me!" Being a child who was bullied most of her life, this was definitely a new concept for me.

By Sunday morning I greeted everyone with smiles and misty eyes as I was forced to say goodbye.  However, sticking with my positive outlook, I decided to simply say "see you soon!" 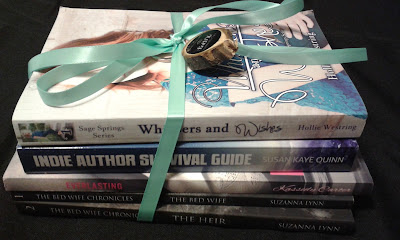 If you are planning on attending #utopYA2015, you're in luck!  I am planning a giveaway at my table for everyone who stops by and signs up for my reader's list!  Additional entries can be gained by purchasing books, but not purchase is necessary to take part in this fabulous giveaway!

What is up for grabs?

I had some wonderful donations by some of my absolute favorite authors!

Posted by Suzanna Lynn at 3:03 PM No comments: 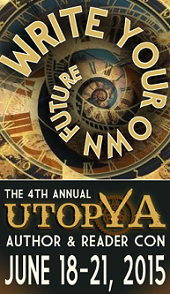 "All my bags are packed, I'm ready to go, I'm standing here outside your door, I hate to wake you up to say good-bye...."

It's that time!!!  Time to get the minivan packed up and head to Nashville, Tennessee to my first ever UtopYa Con!

What is UtopYA Con you ask?  Well, if you want the beautifully summed up version (courtesy of the UtopYA Con website):

An uplifting, collaborative and educational conference for those who love supernatural and contemporary young adult and new adult fiction!
Panels filled with writers and experts in the publishing and entertainment industries will share with established and aspiring authors and screenwriters their tips to improve craft and advance careers, as well as FUN panels for fans where then can directly influence and interact with their favorite writers!


My description?
A chance to get together with some absolutely amazing authors and have the time of my life!

Keep posted here and on my Facebook and Twitter feeds, for pictures, contest and loads of goodies about #utopYA2015

Posted by Suzanna Lynn at 7:09 AM No comments:

Email ThisBlogThis!Share to TwitterShare to FacebookShare to Pinterest
Labels: Book signings, The Bed Wife, The Heir 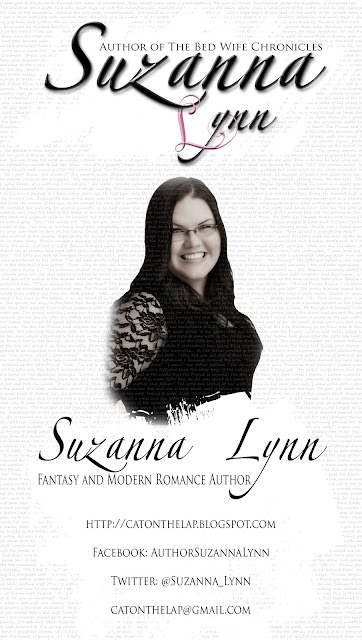 In the spirit of wanting to create a logo for myself, I ended up creating a whole new look!

I took the first two chapters of my first book, The Bed Wife, and created a unique look that will be eye catching at all the author signing shows and shows off a flirty, romantic side!

So be sure to swing by and say hello if you are ever out at a book conference or convention and see my sign!  I love meeting my fans, and making new friends!

Posted by Suzanna Lynn at 1:18 PM No comments: