#NaNoWriMo2015 Not winning is still a success 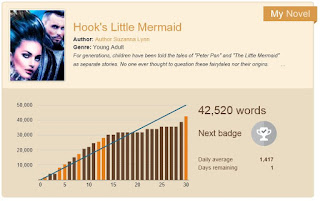 For the last thirty days, I (along with numerous amount of my author friends) took on the task to complete a 50K word novel in 30 days.

Halfway through the month, I was way ahead. My estimated finish date was November 22, I was feeling great.  I started see "NaNoWriMo Winner" badges on my Facebook wall as fellow authors completed the journey.

I got sick, my kids got sick, housework, the Thanksgiving holiday... you name it. "Hook's Little Mermaid" came to a screeching halt as life took over.

But as Dom says in the original The Fast and the Furious. "It don't matter if you win by an inch or a mile. Winning's winning" and apparently, loosing is loosing... or is it?

It took me a year and a half to write my first three books. A good personal accomplishment to be sure, but not exactly a world record. However, thanks to NaNoWriMo I was able to push out nearly 43,000 words in a month. I have never written anything so fast in my life!

Yea, I may be rambling on, and I may sound as though I'm making excuses for not succeeding. But I'm not. If I wanted to, I could jump on my computer and throw out seven thousand more words of jumbled content in order to get the "Winner" badge, but instead, I am going to take a step back, look at my book, and keep on trucking during December.

So for those of you who are beating yourselves up about not completing NaNoWriMo, remember these quotes I came across: (sorry, I couldn't find the sources... feel free to comment if you know the sources)

"Sometimes you win, sometimes you learn."
"Sometimes we need to loose the small battles in order to win the war."
"We didn't lose the game; we just ran out of time."

And remember, NaNoWriMo is not a list of winner's and losers. It's a community meant to encourage and motivate. Let it be that for you.
Posted by Suzanna Lynn at 7:13 PM 2 comments:

I'll admit it. I've been a bit MIA so far in November.

I mean, the first I had the release of "The Queen" but after that I just went dead in the water right? Well, not really. Because I have actually be tucked away in the writing cave every single day working on my newest work, "Hook's Little Mermaid" during #NaNoWriMo.

This is the first year I have ever participated in NaNo because I'm still very new to writing. Last year was an emotion rollercoaster for my family, so I didn't even dare think about trying it then. But this year I felt I was more prepared.

I had been mentally working on my fairytale retelling series "The Untold Stories" since the beginning of the year; jotting down little notes whenever something would come to mind. After #Utopia2015, I figured out that "Hook's Little Mermaid" would be the first book in the series.

At the beginning of October, I committed myself to taking the #NaNoWriMo2015 challenge. So I grabbed my notebook (I love keeping my notes on paper instead of some kind of spreadsheet) and started plotting out the storyline. Sure, there were holes that would need to be filled along the way, but for the most part, but November 1st I was ready to start writing.

I decided I would push myself to do 2,000 words a day in order to get done before the 30th (or in case one of my kids or myself got sick and I needed to take a day off).

Do I feel that the story will be finished by November 30? No, not really. I mean, I plan to have my 50K word count but then there is the long and wonderful process of printing it off (again, I like paper and pen) and going over it about ten times with my red pen.

But I have committed to having this book completely done by Spring. I have already booked my wonderful editor (who I don't think I could possibly publish a book without her being part of it) for March 1, which means that I have to have this book editor ready by then.

What does that mean for you, the reader?

It means that you can plan on enjoying an amazing new adventure featuring the notoriously sexy Captain Hook and a beautiful little mermaid named Elynna, in the near future.

Until then... it's time to slip back in the writing cave.
Posted by Suzanna Lynn at 9:40 PM No comments:

As part of the Release Day Blitz taking place today, I have put up a sale!

Get book one, The Bed Wife, for FREE today only!

Get book two, The Heir, on sale for only 99 pennies!

That's right, get the entire series for less than $4.00 today only! 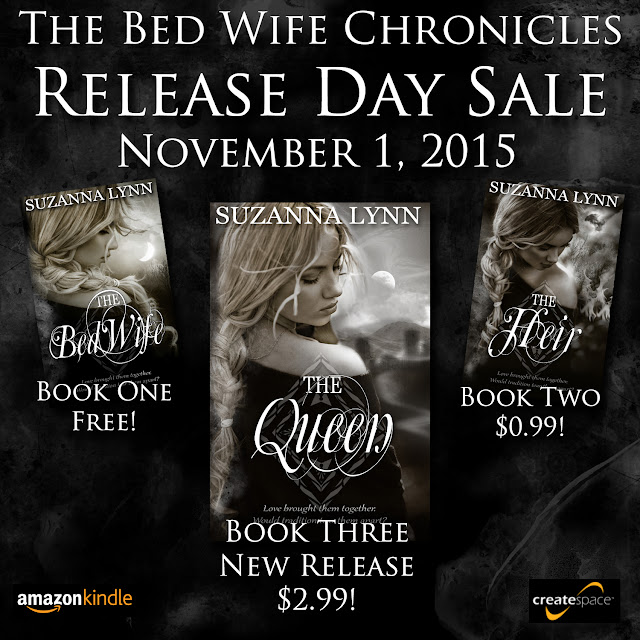 Posted by Suzanna Lynn at 5:00 AM No comments: