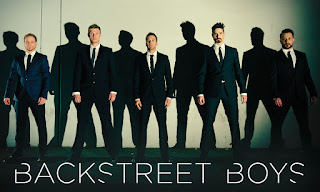 So you want to know my favorite musician? Well, you might as well as me which one of my children I love the most!

I seriously have always had a love of music since I was small. I sang through high school and even wrote some songs and preformed as a young adult.

Music isn't something you just hear, it something you feel in your bones. I'm very eclectic and like all kinds of music (except screamo- that's what my daughter calls it).

I have several favorites that come to mind off the top of my head. I love Ellie Golding, Lady Gaga, 30 Seconds to Mars, Tim McGraw, Sia, Black Veil Brides, Twenty-One Pilots and the list goes on.

However, if you really want to get to the root of my music love, just ask which concerts I've been to. The answer? Backstreet Boys... several times actually lol

I know, I know, it makes me a total nerd/fan girl but I don't care. I can't help but turn up the radio anytime one of there songs come on. Probably because it reminds me of being a teenager. I had my walls plastered with pictures of them torn out of "Tiger Beat" and those other magazines.

So I guess, if I were forced to pick, I would have to say my original was definitely Backstreet Boys. But since then, I have opened up my ears and heart to all kinds of music!
Posted by Suzanna Lynn at 10:31 AM