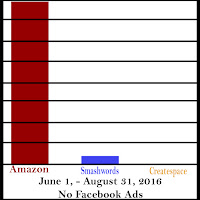 I gave this speech/demonstration yesterday during Penned Con and wanted to share it with the entire author/blogger community. I feel the more we help each other, the more we all succeed.
The information shared here is merely my one experience and results are not considered typical.
The chart on the left shows three months’ sales on my book “Hook’s Little Mermaid.”  It is a clean teen/ya fairytale retelling book (which is a pretty hot genre at the moment). As you can see, Amazon is the biggest seller of this book, bringing in 95% of the sales during a three-month period. Createspace is the lowest seller, bringing in less than 1%. 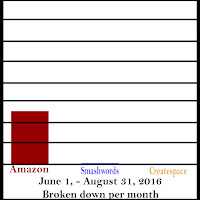 To make this experiment worthwhile, lets average these three months.  With the graph on your right, you will see how this is broken down. This is relevant because our ‘test’ takes place during a three-week period. It’s hard to judge three weeks against three months. 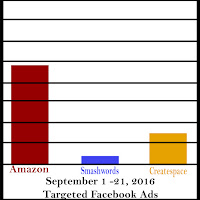 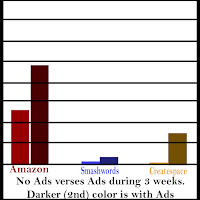 Our final graphs show the results of a three-week ad placed on Facebook. I spent $75 and chose to target my audience (instead of choosing ‘people who like your page and their friends’). I picked to target women ages 15-65 in the United States, Canada, United Kingdom and Australia (as I have found most of my sales come from these countries). Then, using keywords that are relevant to my book, I was able to reach readers who are necessarily looking for a book. In the case of “Hook’s Little Mermaid” I tagged fan bases like “Once Upon a Time” “Grimm” “Colin O'Donoghue” “Peter Pan” and “The Little Mermaid.” This is, in no way, being deceptive. You’re not forcing your book on them, you’re merely suggesting “Hey, since you like Once Upon a Time you might like to look into this.”


As you can see in the final graph (which is only a three-week period verse the one-month breakdown), sales on Amazon average higher. And while Smashwords stayed relatively the same, Createspace increased sales by seven times what it was doing.
Questions, answered.
Do Facebook Ads Work?
Absolutely! However, it’s not just a magic button to make you an insta-best seller. It requires research and patience to find the right algorithm to get your book in front of readers who are interested.
How do I choose who to target?
It depends entirely on your book and genre. If you have written a crime thriller, you could target both men and women. While a romance is going to lean toward women. Age is very subjective. It’s hard to guess what age would read a certain genre. This will require research and fine tuning over time. Additionally, if your book has adult content, you don’t want to target younger (under 18-years-old) readers.
How do I pick keywords?
Picking keywords like “romance novels” and “young adult books” is far too broad. Instead, pick keywords with similar fan bases to your story.
Is there a movie or television show that has the same type content? Maybe your book is fantasy set in a mythical world with elves, dwarves and dragons. Then you might look into fan bases interested in those things. For example, Lord of the Rings, The Hobbit, Game of Thrones, etc. Have a super sexy romance with a lot of adult scenes? Then your keywords would be along the lines of Fifty Shades of Grey.
Choosing keywords like this isn’t riding on the coat tails of someone else’s success. You’re merely putting your ad in front of people who are interested in this type of work in the first place.
My ad has been on Facebook for a week and I’ve only had a couple sales. Am I doing it wrong?
No, not necessarily. A reader generally has to see an ad several times (I believe in the industry the magic number is seven) before they delve further into it. Maybe the first time it showed up in their feed they were on the way to work and didn’t have time to look. Maybe someone called them on the phone and they forgot. However, Facebook will continue to put that ad in their feed as long as they are a fan of the interests you listed as keywords.
How do I make an ad?
Making an ad is not always easy. For starters, never (AND I MEAN NEVER) use a photo you googled. Just don’t. Ever. Never ever. Go to a stock site if you must and purchase a photo. It is far less expensive than attorney and court costs in a copyright lawsuit. 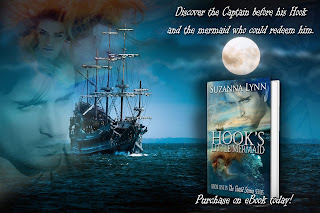 Additionally, a genuine ad will create a relationship with your readers. For example, in my book “Hook’s Little Mermaid,” had I used a picture of Colin O'Donoghue for my ad, readers would not only be disappointed when they found out the book was not a ‘Once Upon a Time’ book, they would be less trusting of me as an author.
Your ad needs to have minimal wording but also be eye catching. Here is an example of my ad for “Hook’s Little Mermaid.” The tagline and pictures speak for the book.
I understand that not all people are good with programs like photoshop. Or maybe you would rather spend more time writing and less time making Facebook ads. This is where graphic design companies come in. There are many who will create an ad for you for a modest fee. I personally use “FunkyBook Designs” and their ads run $35-$50 depending on detail and the ad is yours to use however you chose. And a plus, they purchase the rights to the photos so you don’t have to worry about copyright infringement!
Posted by Suzanna Lynn at 7:00 AM

Email ThisBlogThis!Share to TwitterShare to FacebookShare to Pinterest
Labels: informative, Randomness, The Author