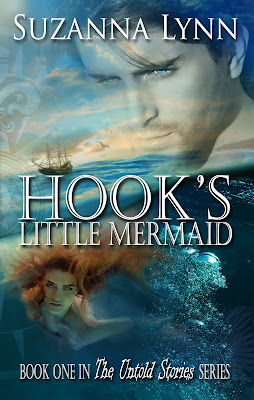 Once everything is said and done, will the captain be able to overcome his need for revenge? Will he let compassion steer him toward love? Or will Captain Hook live up to his villainous reputation?
The cover of the much anticipated "Hook's Little Mermaid," book one in The Untold Stories, has been revealed!

With only two weeks until publication, you can now preorder your copy at Barnes & Noble, iBooks, Kobo and Smashwords (Amazon will not have a preorder for this title but will carry it on April 2 when it is released).

In addition to the cover, fans will get exclusive teasers as well as a teaser trailer over the next two weeks, building to the anticipation of the release.

If you would like to join in the fun of the release, be sure to join the Facebook Party wherein numerous authors have come together to celebrate the release and will be giving away amazing prizes.

Lastly, you can help spread the word by participating in the Thunderclap campaign which will announce the release to social media on April 2 (link below).
Posted by Suzanna Lynn at 10:10 PM